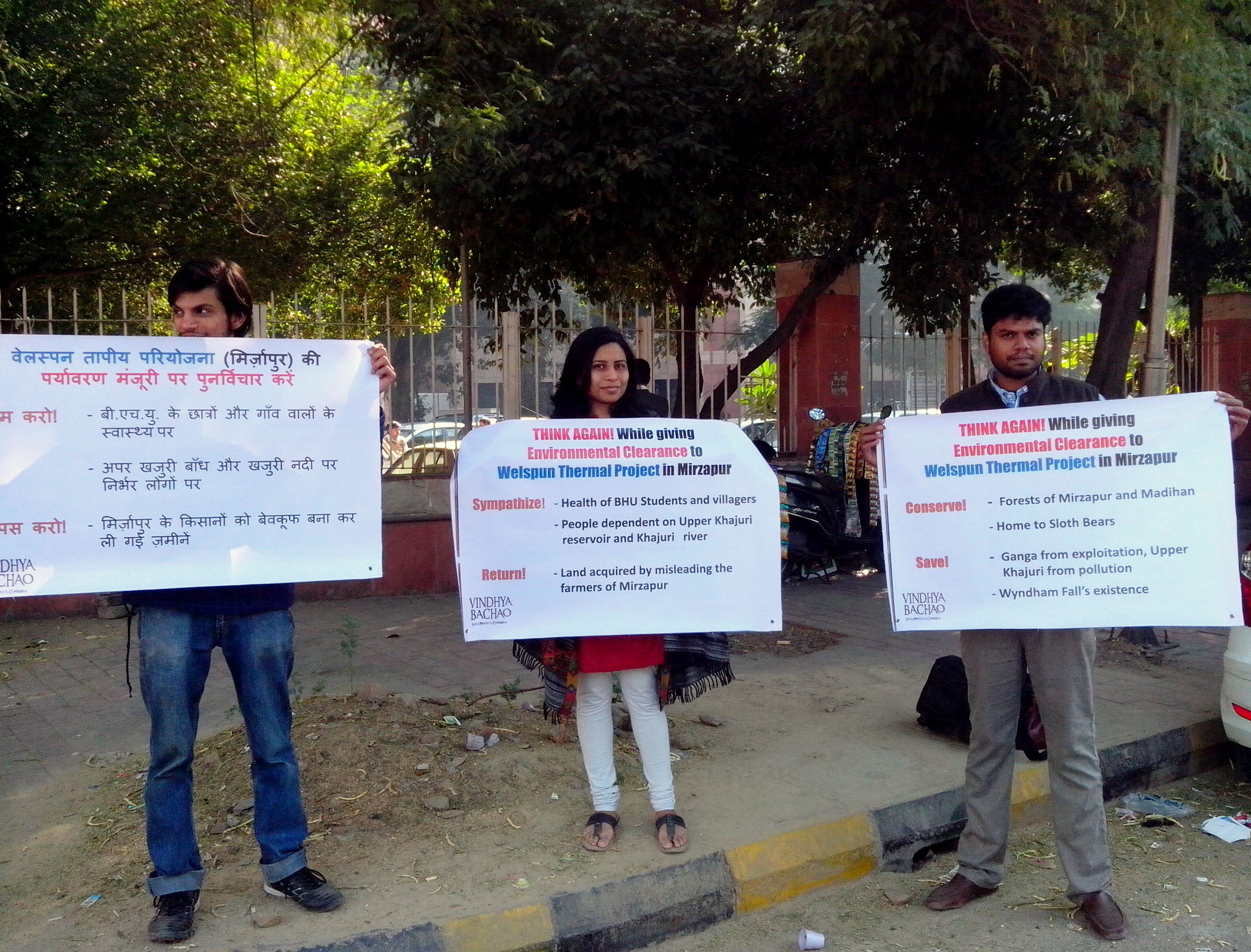 A group of concerned citizens staged a peaceful demonstration outside the premises of the SCOPE Complex, New Delhi, where the Expert Appraisal Committee (EAC) was convening to deliberate on the Environmental Clearance to the 1320 MW Coal-based Thermal Power Project of M/S Welspun Energy (U.P.) Pvt. Ltd proposed in village Dadri Khurd, Mirzapur. The demonstration was part of the ‘Vindhya Bachao’ movement, an initiative to protect the old virgin forests of Mirzapur and saving the sloth bear habitat. The movement is backed by the Mirzapur based NGO, Vindhyan Ecology and Natural History Foundation.

The environmental clearance of the project has already been deferred once in the EAC meeting of March, 2013 on the grounds that the EIA, report prepared by the project proponent, did not contain sufficient information, including information regarding the source of coal and the uncertainty of water availability. Several representations were sent to the Ministry of Environment and Forests regarding the wrong siting and other discrepancies shown in EIA report. There has been huge protest by local farmers alleging that the company acquired land for the project by cheating them. The Vindhya Bachao team has prepared a ‘Site Visit Report’ after a field visit to the project site on 15th September, 2013, and sent it to the Ministry of Environment and Forests. Broadly, the report highlights the following concerns:

1. The forests of Mirzapur and Madihan are the home of Sloth bears and other animals protected as Schedule I species under Wildlife (Protection) Act, 1972

2. The Project will result in the pollution of Upper Khajuri reservoir and river Khajuri, on which the entire population of the region including BHU south campus depends for
drinking and irrigation.

3. The existence of the district’s most famous water fall – the Wyndham Fall – will be significantly impacted by the project.

4. The project will affect the health of students and staff of BHU South Campus, which is very close to the project site.

5. Land acquisition has been done by false information and misleading the local people.

The 24 pages report which was submitted to EAC-Thermal Projects by Vindhya Bachao contains several photographic evidences where it contradicts the various false claims made by the project proponent – for instance, that the project site is on barren land and no forest land is involved. The report not only shows that the entire project site is situated in a forest area but the road leading to the project site is also a forest department owned road. The report contains wildlife data obtained from Forest Department of Mirzapur through RTI application, which again supports the fact that the company did not even consider the presence of Schedule I animals like Sloth Bear, Chinkara, Bengal Monitor and Peafowl.

We have sent written representations to the EAC a couple of times earlier. This project, situated very close to BHU South Campus, will destroy the virgin forests of Mirzapur and threaten the sloth bears of the region. This will also have a significant impact on water resources of the
region, said film maker and activist Debadityo Sinha, who is also an alumnus of Banaras Hindu University.

The Banaras Hindu University has also sent a letter to the MoEF on 18th September, 2013 showing their concern for the health of students of BHU campus and the impact on the drinking water supply of the campus which depends entirely on Lower Khajuri dam, which is fed by Upper Khajuri dam. The BHU has recommended shifting of the project to some other place. The EIA report does not mention anything about the involvement of forest land and the habitat of critical wildlife species like Sloth bear which share conservation status not less than tiger or elephant. Further, a significant part of the project site is prime agricultural land.

The demonstration started at 8.30 AM outside the SCOPE complex, New Delhi and lasted till 10.30 AM.