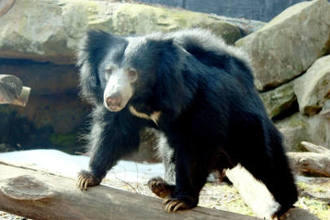 It was only in the year 2010, when I first came across a very ‘different’ looking bear in Mirzapur district of Uttar Pradesh (UP), that I realized there are bears other than the very popular Polar and Grizzly Bears, both of which are, in fact, not found in India. It was also my belief that the dancing bears one saw around were actually Black bears found in Himalayas.

It took me a while to understand that there is one more species of bear about which we are almost never told - not in school textbooks, not in wildlife documentaries on TV. Even in the recent Walt Disney movie Jungle Book, the bear looked like a Grizzly, when Rudyard Kipling’s original character was a Sloth bear. the truth is that there is very little discussion around the Indian Sloth bear and this is now becoming the biggest hurdle in its conservation.

The Sloth bear is endemic to the Indian subcontinent and is concentrated mostly in and around the Central Indian landscape, with the range extending upto Nepal and Bhutan. It is reported to have recently gone extinct in Bangladesh.

There are also a number of interesting things about Sloth bears – they never hibernate, they have the largest canines with respect to body size of all bear species and are specially adapted to feed on ants and termites which form their staple food, along with fruits and flowers.

The flexibility of their diet is their greatest adaptation to survive in harsh climates. The only natural competition for food comes from the pangolin. In recent times, however, human activity is becoming the single greatest threat to their survival.

We recently mapped Sloth bear distribution and movement in reserve forests of UP’s Mirzapur district and also studied human-bear conflict here (available at: https://goo.gl/Nu7h45). Our observation suggests that most of the conflict incidents occur in areas where there has been a reduction in habitat, the main reasons being loss of forest continuity, agricultural encroachments, mining and most importantly, settlements along important water sources and forest corridors.

Most of the incidents happen during collection of Mahua fruits and defecation in the early morning hours, while the other confrontations occur during collection of fuelwood inside forests. It is also important to note that a major population of the Sloth bear exists outside of protected areas and this makes them highly vulnerable to conflict with humans.

IUCN has classified the Sloth bear as Vulnerable’ while India’s Wildlife (Protection) Act, 1972 has classified them under Schedule-I – placing them in the same category as the tiger, leopard and elephant. The conservation of Sloth bears in India, however, is yet to gain momentum and it is high time attention is directed to this animal.

- Debadityo Sinha is an environmentalist and founder of Vindhyan Ecology and Natural History Foundation.