The National Green Tribunal allowed the ongoing construction on the Kanhar dam to continue despite its many illegalities. Four people who know the situation best explain why we should be disappointed. 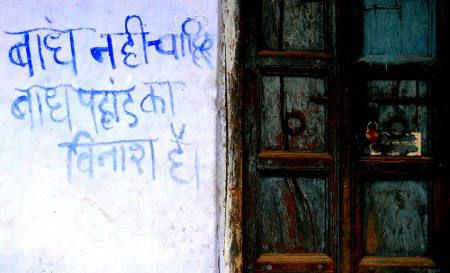 Kanhar, 1976; Polavaram 1941. These are just two of the several dam projects that were proposed decades ago but are yet to see the light of day. Capitalist media is quick to denounce 'anti-development' activists as being the roadblocks on the glorious path of progress but there is more to it. Unlike what we are all led to believe, halting a state-sponsored project without strong legal backing isn't easy. The Supreme Court of India remains one of the country's institutions that retains respect and a reputation for being just. If some dams have been issued a stay order by the National Green Tribunal, it is not because of agitations but because the dams were environmentally and legally unsound in the first place.

There are at least three valid legal reasons why the National Green Tribunal should have halted the ongoing construction activity at the dam.

A case was filed in the National Green Tribunal based on an application filed on December 22, 2014 by O.D. Singh (UP People’s Union for Civil Liberties) and Debadityo Sinha (Vindhya Bachao Abhiyan) against the UP Government and Ministry of Environment, Forest and Climate Change (MoEF&CC) for carrying out construction activity of the project without statutory clearances under EIA Notification, 2006 and Forest (Conservation) Act, 1980. The judgement was given on May 7, 2015.

Reactions on the Kanhar judgment
"The NGT judgment on Kanhar dam is most disappointing", said Himanshu Thakkar, South Asia Network on Dams Rivers and People. "Lakhwar Dam on the Yamuna is another case that was taken up till 1992 and then abandoned and now has been taken up again without fresh environmental clearance. Many other projects are in a similar situation and need to go through fresh appraisals, no doubt. We in fact are saying that the environmental clearance needs to be reviewed and reconsidered for such projects every few years, say every five years", Thakkar added.

According to Roma Malik of the All India Union of Forest Working People(AIUFWP), the deliberations of the National Green Tribunal are inconsistent with it's judgement. She says, "The people opposing the Kanhar Dam have always stated that the dam was built in an illegal manner; this has been validated by the National Green Tribunal in its judgement of May 7, 2015. The court has decided that the demands of the Dalits and Adivasis of the dam-affected villages are correct. Despite this, in just one sentence at the end, the Court issued directions to complete the existing work just to make the State happy. There is a complete stop on new construction. The reality is that all the work that is going on is new construction. Thus there is a discrepancy between the Green Tribunal’s 50-page deliberation and the direction given at the end".

"The observations of the National Green Tribunal and its directions are not consistent", felt Parul Gupta, Advocate from the side of Peoples Union of Civil Liberties, Uttar Pradesh and Vindhya Bachao Abhiyan -- the applicants in the case. "It’s a painful irony that the National Green Tribunal’s observations approve the major contentions raised by the applicants and points that the old clearances of 1980s holds no good with respect to the present changes in the environmental conditions. It also notes that the very substantial work of the project is still to be completed. Yet the National Green Tribunal did not halt construction activity on the grounds that huge amounts of money have already been spent on the project. The judgment states that delaying the same at present for want of fresh clearances under law would neither serve the interest of the environment or ecology nor would it serve any public purpose", said Parul Gupta. The courts observation that "the case, examined in the light of the principles of sustainable development and the precautionary principle, would tilt in favour of the State is disagreeable", Gupta said.

Debadityo Sinha, Vindhya Bachao Abhiyan, an applicant in the case said, "the judgment is a mixed one. While it provides partial relief by directing that a committee comprising of experts of Ministries, Principal Chief Conservator of Forests and Indian Institute of Technology, Kanpur will look into critical issues like complete Resettlement and Rehabilitation and would study the environmental and ecological impacts from all aspects including environmental flow requirement of the river and impact on the elephant corridor, the decision is greatly tilted in favor of the State". In particular he felt that the environmental clearance should not have been linked to the date of acquisition of the land, as project activity had not commenced at the site. "While the court notes that stoppage of work would further enhance the cost of construction it has not taken into account the cost of infrastructural losses leave apart the social and environmental losses should the project continue in its present form", he said.

Several projects in India carry in their trail the same sorry tale. While the judgment says that the "project is intended to provide and inject better facilities of living", it is the project affected people who will be left to negotiate their new lives over the ruins of their ravaged existence.